This is the official site of project Improvement of Product Development Studies in Serbia And Bosnia and Herzegovina, No 530577-TEMPUS-1-2012-1-RS-TEMPUS-JPCR. This project has been funded with support from European Commission, within TEMPUS IV programme.

Promotion of IPROD project in Kragujevac 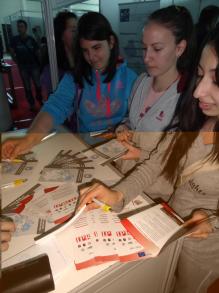 At the Fair Education and Employment, which was held in Kragujevac from 19.04.2013. to 20.04.2013., IPROD project was promoted. For this purpose, leaflets with basic information about IPROD project are distributed to visitors. Gallery from the event can be found here.

Meeting of WP1 manager with WP1 team from...

Promotion of IPROD project in Niš

IPROD project was promoted at the Fair Education, which was held in Niš from 12.04.2013. to 13.04.2013.  For this purpose, leaflets with basic information about IPROD project are distributed to visitors. Gallery from the event can be found here.

The magazine of student organisation of Faculty of Technical Sciences of University of Novi Sad published an article devoted to start of IPROD project realisation. Besides the brief description of the IPROD project, article describes the activities performed during the kick-off meeting of IPROD...

The team for realization of all activities from Work package 1 (WP 1) of IPROD Tempus project is formed. List of WP 1 team members can be found here.

The local teams were formed within each partner university for the implementation of IPROD Tempus project activities. The list of persons responsible for realization of project can be found here.

Meetings of Project Management Committee and...

Meeting of Project Management Committee (PMC) was held on December 13th at the University of Niš. Members of project consortium discussed all aspects of project realisation such as management, financial management, quality control, sustainability and dissemination of the IPROD project. The...